The Muslim Rights Concern (MURIC), has described the suit challenging the Arabic inscription on the Nigerian currency (naira) as ‘acrobatic religiousity.’

MURIC noted that it was not Nigerian Muslim leaders who brought the idea of Arabic in the Nigerian currency in post-independence Nigeria, adding that the man who initiated it was a Christian, an Urhobo officer by name General David Akpode Ejoor.

The group tackled Nigerian Christians and former President Goodluck Jonathan, accusing him of becoming an instrument of division by removing Arabic from the naira during his administration.

MURIC made the assertion in a statement signed by its Director and founder, Ishaq Akintola and made available to DAILY POST on Monday.

The group was responding to a suit filed by a Lagos-based lawyer, Malcolm Omirhobo arguing that the Arabic inscription on naira notes portrays Nigeria as an Islamic state contrary to the country’s constitutional status of a secular state.

The lawyer also filed a similar suit against the Nigerian Army seeking the removal of Arabic inscriptions from its logo. The cases are being heard before Justice Mohammed Liman at the Lagos High Court.

“How many times do we need to tell our Christian neighbours that Nigeria is not a secular but a multi-religious state. A secular state is one that does not recognize religion as in communist states. But Nigeria recognizes all the religions in the country and the Constitution also begins with the words ‘under God’. Secular states do not recognize the existence of God.

“So how can Nigeria be a secular state when we are ‘under God’? In addition, nowhere in the whole constitution was the word ‘secular’ ever used and we challenge anyone who can find that word from the constitution to mention the chapter, section and sub-section.

“Seeking to remove Arabic from the naira is the height of ignorance because Arabic is just a language like English or French, not a religion. By the way, what is on the naira is not even Arabic. It is ‘Ajami’ using Arabic letters as a form of transliteration.

“Even if Omirhobo single-handedly succeeds in removing Arabic from the naira, is he going to remove the numerals 5, 10, 100, 1000 indicating the denominations as well? If he cannot, then he still has a long way to go because even those numbers are Arabic.

“The numerical system (1, 2, 3, 4, etc) were invented by a Muslim mathematician by name Alkhawarizmi (died 850) in the 9th century. Nay and more than that. Whereas ancient Greeks had men like Plato, Aristotle, Euclide, Thales, Theodocius, etc whose scientific theories only managed to survive their times and Europe boasts today of scholars like Nicholas Copernicus, Francis Bacon, Galileo Galilei, Rene Descartes and Isaac Newton with their moribund and Godless postulates, the list of renowned Muslim scientists is endless.

“For instance, Israel’s currency has Arabic inscription on it. Nigerian Christians who go on pilgrimage to Jerusalem every year spend Israel’s money and see Arabic on it. Did they tear it into pieces in anger? They did not ask the Israeli authorities to remove the Arabic on their currency but when they return to Nigeria they maintain their hardline opposition to Arabic on naira. Where is objectivity? Is this not articulated religiousity?

“Again, hardly would any imported electronic gadget enter Nigeria without its manual containing an Arabic section. That is business sense, not religion. But Muslim-haters are swayed by emotion and they cannot separate the wheat from the chaff. Common sense is not so common. Of course there are still Christians who are moderate, liberal and realistic. They are the few exceptions who will not allow themselves to be led by the nose.

“One major argument against the removal of Arabic from the naira is that a large percentage of the Nigerian population will be cut off from our monetary system if Arabic is removed from the naira because Arabic is one of the local languages in Nigeria. It is used by the Shuwa Arabs in Borno State. Therefore Arabic cannot be a foreign language.

“Furthermore, the Bible used by Christians in Israel, Egypt, Palestine, Libya, Syria and other Arab countries are printed in Arabic language only because that is the only language they understand. Does that make the Bible an Islamic Bible? Their church services are conducted in Arabic. Have those churches become mosques?

“Interestingly enough, God is called Allah in the Arabic Bible. If Arab Christians want to say ‘God is great’, they also say ‘Allahu Akbar’. To thank God they say ‘alhamdulilah’ just like Muslims. The population of Palestine is 12 million and 7% (about 840,000) of this number are Christians. Yet the language of this 7% is Arabic. Perhaps Omirhobo will like to apply to the International Court at the Hagues to reject them as Christians because they speak Arabic?

“Omirhobo’s argument that Arabic on naira notes portrays Nigeria as an Islamic state holds no water because if Arabic is Islam, then English is Christianity. Hence if Arabic on the naira note is Islamisation, non-Arabic letters on the same naira is Christianisation. By extension, if the use of Arabic is Islamisation, the use of English language in Nigeria, particularly as a lingua franca, is the mother of all christianisation.

“For equity, therefore, Nigeria should have two official languages: Arabic and English with priority and emphasis in that alphabetical order. But in their magnanimity, tolerance and wisdom, Nigerian Muslims have not come forward to demand that Arabic should be Nigeria’s second official language. For that reason alone, the plaintiff’s request for the removal of Arabic from the naira is frivolous, petty, selfish, myopic and parochial.

“Perhaps the plaintiff thinks Nigerian Muslims were the ones who initiated the inscription of Arabic on both the army badge and the naira notes. Omirhobo needs to be told that even the colonial masters inscribed Arabic on the currency printed by Britain and used in Nigeria. The words: ‘pound daya’, i.e. one pound was inscribed on colonial currency. Omirhobo may therefore need to sue the Queen of England.

“To continue along the lanes of history, it was not even Nigerian Muslim leaders who brought the idea of Arabic in the Nigerian currency in post-independence Nigeria. The man who initiated it was a Christian, a Urhobo officer by name General David Akpode Ejoor (rtd).

“He was the one who introduced the Arabic inscription and the Star emblem into the Nigeria Army crest. He was given the assignment and research led him to pick the Arabic words ‘nasrun minallahi’ (meaning ‘victory is from God’) and a committee made up of three ministers of the First Republic : Muhammadu Ribadu (Defence), Festus Okotie-Eboh (Finance) and Yar’adua (Works and Housing) approved his choice. Ejoor confirmed this in his book ‘Reminiscences’ (page 16).

“The Christian who took the Central Bank of Nigeria to court claiming the country has been Islamized because of the Arabic inscription on the naira note failed to see how heavily Nigeria has been Christianized by observing Saturday as a public holiday because of the Seventh Day Adventists and Sunday because of other Christians. But the Muslims are not given any day at all.

“MURIC appeals to Nigerians not to allow the fear mongers and merchants of hate continue to spread fear and sow discord among us. Many of those saddled with the task of uniting us have become instruments of division. Ex-President Jonathan is an example. He removed Arabic from the naira because he listened to hate preachers whom he took along on his futile but numerous trips to Jerusalem.

“They indoctrinated him into believing that Arabic on the naira implies Islamisation. Although he saw Arabic on Israeli currency on his trips to Jerusalem, yet he swallowed the lie hook, line and sinker. Of course it cost him his much-coveted second term because his action had been rightly interpreted as anti-Muslim.

“We charge Nigerians to open up their minds in order to avoid becoming victims of accidental civilisation or, worse still, educated illiterates. Arabic is not Islam and Islam is not Arabic. One is a language, the other is a religion. Let us learn to understand, to tolerate, to give, to forgive and to love.” 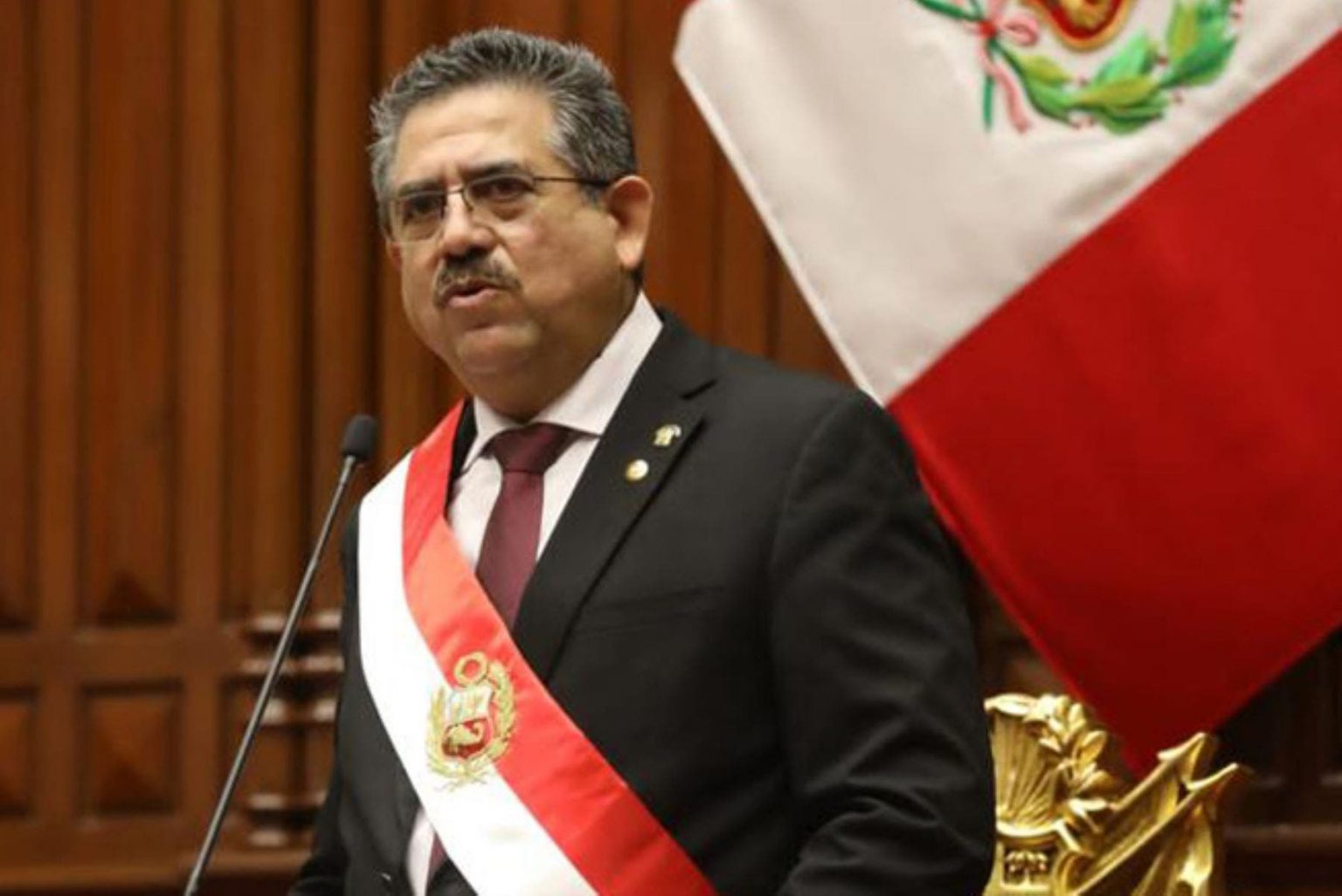 Manuel Merino, Peru’s interim president has resigned after the death of two people.

The deceased were among the tens of thousands protesting against the government in Lima, the capital city.

On Sunday, the country’s leader announced his exit from power in a broadcast.

Hours earlier, twelve ministers expressed their grievance against police brutality and Merino’s handling of the crisis by stepping down.

“I want to let the whole country know that I’m resigning,” Merino said.

The former speaker of Congress was in office for five days.

He replaced President Martín Vizcarra, impeached on Monday over bribery allegations he denies.

Protesters, mostly youths, have been in the streets in opposition to Vizcarra.