A female pilot proved to the World yesterday that what a man can do a woman can do better by crash landing Boeing 737-300 belonging to Air Peace at the Murtala Muhammed International Airport, Ikeja, Lagos State.

According to reports, the plane on arrival at Nigeria’s busiest airport experienced turbulent conditions, making the female pilot request for a longer runway 18R, making a hard landing. 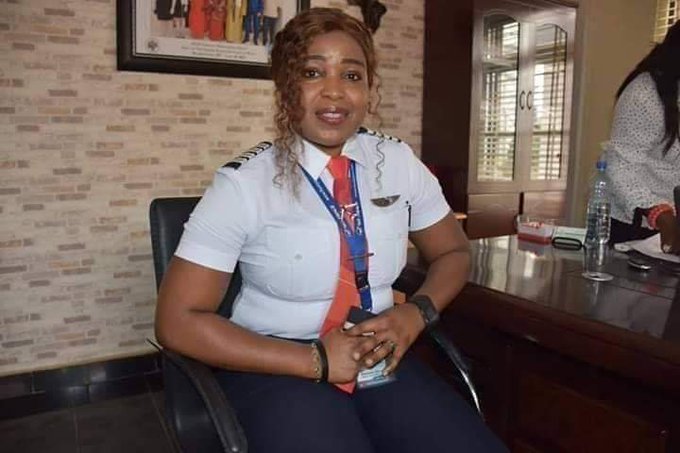 The hard landing caused damage to the plane’s front wheel while the front tyre burst. The plane with the registration number 5N-BQO operating from Port Harcourt to Lagos.

The pilot actually saved the lives of over 100 passengers aboard. She is Capt. Simisola Ajibola and here are the few things we know about her.

So, who is Capt. Simisola Ajibola?

She is the first female pilot to be decorated by Air Peace Airlines. She joined the airline in February 2017 as a Senior First Officer (SFO).

A B737 airplane, flown by a Female pilot, crashlanded at the Murtala Mohammed Airport, MM2, Lagos state after losing its tyres. The Airpeace Aircraft was conveying passengers from Portharcourt, Rivers state. pic.twitter.com/eFuz4oElIO

There are four pilots in her family: Simisola and two of her siblings took after their father. In a report, it was gathered that three of her family members are with Air Peace.

In July 2018, Simisola was presented to the Chairman of Air Peace, Allen Onyema, when she was decorated by the company’s Chief Pilot, Capt. Victor Egonu.

As at 2018, the airlines has eight women in its employ, but Simisola was described as a spectacular pilot during her decoration ceremony.

Some Nigerians took to Twitter after the incident to shower encomium on her for the brave courage to save the lives of 139 aboard: 133 passengers and six crew members.

Her employer, Air Peace, also commended her for her professionally handling the situation that could have led to a huge disaster.

The Chief Operating Officer of Air Peace, Oluwatoyin Olajide, was quoted as saying: “Caption Ajibola noticed sudden weather changes when approaching Lagos and demanded to land on the International runway as it is longer and wider than the domestic runway.

“After landing safely and rolling to the runway exit, the nose gear developed a problem and partial collapsed. The crew notified the airport authorities who quickly ensured the safe disembarkation of the passengers via the passenger door”.

The Commissioner of Accident Investigation Bureau (AIB), Engr Akin Olateru, who confirmed the incidence stated that “The aircraft, with 133 passengers and 6 crew members on board was on approach to Murtala Muhammed International Airport, Lagos from Port Harcourt. From the information provided, the aircraft nose wheel collapsed on landing on the runway (18R) and the nose wheel gear tire sheared off. There was a minor injury but no fatality and safety investigators have commenced investigations have swung to action to unravel the circumstances surrounding it.